The Canberra region has been home to human population for over 30,000 years.

We recognise the Ngunnawal people to have been the first inhabitants of the Canberra region. Carbon dating has highlighted how extensively the original inhabitants managed the land.

With its reliable food and water supply, the Canberra area became an important meeting place for neighbouring clans. The Gundungurra people to the north, the Ngarigo to the south, the Yuin on the coast, and the Wiradjuri to the west. All would meet for rituals, marriages, celebrations and initiation ceremonies of young men.

One nutritious food source in ancient times was the Bogong Moth. These moths migrate through the area every spring on their way to the cooler mountains. Each November, the arrival of the Bogong moth heralded a feasting festival at Uriarra. A well-known spot on the Murrumbidgee River.

Roasted over a fire, the abundant Bogong Moth added a rich, nutty flavour to any dish. Bogong moths are a vital part of the Australian Alpine ecosystem. Unfortunately, we have seen a significant decline in moth numbers in recent years.

You can read more about the decline in migration numbers and what impact this has on the ecology in this February 2019 article.

Europeans in the 1820s disrupted the Aboriginal way of life. English-style properties were established, taking away the traditional owners’ lands.

Aboriginal people and European settlers lived and worked together for a while during the 1800s until European diseases such as measles, flu and venereal disease took their toll. By the end of the century, few aboriginals remained.

Joshua John Moore, thought to be the first European settler in the area, established a property he named ‘Canberry’. Near the current site of the Australian National University.

Another settler, Robert Campbell, established Duntroon Estate in 1825. Duntroon became a significant property. It included a dairy, worker’s cottages, a church–The Anglican Church of St John the Baptist, and a schoolhouse. Federation and a Federal Capital City

During the late 1800s, moves were afoot for the colonies to federate. The six colonies each had a stable form of self-government and acted independently of each other. They had their own laws, defence forces, postal services and charges. Each colony had its tariffs on goods traded between the colonies. Railway gauges varied between the colonies, making transportation difficult. Passengers had to undergo customs searches at the borders. Then change trains to continue their journey on a different rail gauge.

The notion of invasion, possibly by the French, sparked concern that the colonies were ill-equipped with their defence forces. There was a need for unified defence, a foreign policy and immigration policies. National pride was rising and there was a growing recognition that the colonies needed the strength of federating.

The federations of the United States and Canada sparked interest in the benefits of coming together as a nation.

Our ‘Federation Founding Fathers’, a group of men seeking the country’s unification, conducted negotiations, rallies, national conferences and meetings. They worked for decades toward federation and the drafting of the Australian Constitution.

Queen Victoria provided her Commission of Assent in July 1900. And the Commonwealth of Australia came into being on the first day of the new century, 1 January 1901.

With a newly federated nation, came the need for a federal capital. Sydney, where the first British settlers landed in 1788, felt it was the mother colony and so the natural place for the Federal Capital. The city of Melbourne had become a bustling and sophisticated city. It was a centre for commerce, having enjoyed the spoils of gold discoveries in Ballarat and Bendigo in the 1850s. A strong rivalry between the two cities led to the decision to find a location for the capital. A search was on to find somewhere between the two cities, but not less than 100 miles from Sydney. And so the search was on.

They assessed many areas for suitability as a location of the new Federal Capital. Port Macquarie, Byron Bay, Eden and Dalgety were all considered. They deemed coastal locations unsuitable because of possible future bombardment. A common belief too was that plagues occurred in heavily inhabited cities at sea level. So, the capital would need to be above sea level.

There was a myth that to realise one’s intellectual potential, one needed to be born in a cold climate. Because the air was cold in the Yass/Canberra area (in the winter), men would think more clearly there.

In 1908, the Yass/Canberra area was chosen for the new Federal Capital. The government declared that the new capital would be ‘the finest capital city in the world’ and announced an international competition for the design of this new city. Over 130 entries were received from all over the world. In 1912, they awarded the winning design to Walter Burley Griffin, a young American landscape architect from Chicago. 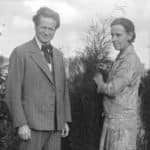 Aided by his talented wife, Marion Mahony Griffin, a landscape architect and accomplished artist, the couple had submitted their plan with Marion’s supporting watercolour designs highlighting the ‘form follows nature’ approach. Their winning design integrated the city with the natural contours of the landform. Their plan was distinct from others, using a ‘garden city’ principle of design, with green space and parklands providing space between urban areas.

Referred to as the Federal Capital, the new city needed a name. Many names were put into the mix, including Myola, Shakespeare, Australburg, New London and Kookaburra.

On 12 March 1913, amid much fanfare and celebration, Lady Denman officially named the capital. Standing on the Foundation Stone with her husband Governor-General Lord Denman, Prime Minister Fisher and Minister for Home Affairs, King O’Malley.

‘I name the capital of Australia – Canberra’, she said, emphasizing the ‘can’. 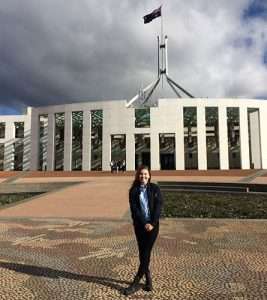 They say the name came from the Aboriginal word ‘Kambera or Canberry. It is claimed to mean ‘meeting place’ because of the rich cultural tradition of Aboriginal groups that met here for millennia.

This leads well into the concept of Canberra today as the meeting place for our parliamentarians. It is also the ideal location to hold our first Rotary Aussie Peace Walk. Where people will come from many places and cultures to experience this special part of this ancient land.

We look forward to meeting you in Canberra.