It began with the World Peace Bell and now the message of peace is being spread to 100 schools around Australia as a Rotary Centenary initiative. ‘If there is to be peace in the world, there must be peace between nations.’ On the shores of Lake Burley Griffin, in picturesque Nara Peace Park, is a World Peace Bell. The park is a tranquil, symbolic place where people can reflect, pay their respects, and be reminded of the desire for a peaceful world.

Hundreds of Canberra locals walk, jog, or ride past the Bell every day. Some stop to take selfies as they pass. Although the Peace Bell has only been in situ for a few years, it has already become a significant symbol for peaceful reflection and ceremony.

The World Peace Bell is the ideal location to start the Rotary Aussie Peace Walk.

To date, Peace Bells have been placed in sixteen countries. Japan, Australia and the USA having more than one bell.

The association’s mission is to raise awareness of peace by casting and installing Japanese temple bells in locations around the world.

Why is there a World Peace Bell in Canberra?

The city was decimated in 2011 when a 6.3 magnitude earthquake rocked the Canterbury region. The quake’s epicentre was close to the city. Its impact was catastrophic. 185 people died, and the world mourned.

The clean-up process was massive. Three years later, buildings still lay in rubble as Michael walked the streets. He wandered through the Botanical Garden, and in this sanctuary, he found the Christchurch World Peace Bell. Amazed, it immediately inspired him to have one in Canberra.

When he returned home, Michael put a proposal to his club. It was accepted, and the Rotary Club of Canberra Burley Griffin began a project to investigate where World Peace Bells came from and what approval processes would be required to install one?

Peace Bells are made from melted-down coins donated by countries around the world. To date, they have been placed in sixteen countries. Only Japan, Australia and the USA have more than one bell.

Since completion of the Canberra Peace Bell installation, the Rotary Club of Canberra Burley Griffin has promoted Peace Bell ceremonies to visiting community and school groups. The ceremony is constructed around the words of Chinese philosopher Laozi (Lao Tzu) inscribed on a nearby plaque (pictured below): Above: The path to the Canberra Peace Bell and the start of the Aussie Peace Walk and a group photo of a school visit to the Peace Bell.

Below: The author visited Christchurch in 2019. The clean-up process is still underway and evidence of the earthquake can still be found throughout the city. ‘We’d like to hold as many Peace Bell events as possible to shine the light on peace and understanding.’

The Canberra Peace Bell was completed at a time when it was most in need.

On Tuesday night following the horrific Christchurch mosque shootings in March 2019, around 3,000 people converged on Nara Park to pay their respects in a shared outpouring of grief and compassion.

Prayer mats were laid out in front of the pavilion, the Bell was rung and the stories were told.

‘I knew the peace bell would become a very significant monument in Canberra,’ Michael Rabey stated.

The Rotary Club of Canberra Burley Griffin hold ceremonies at the Bell each year in September to mark World Peace Day, and throughout the year to reflect on specific events, including the horrific memory of the atomic destruction of Hiroshima and Nagasaki that ended the war in the Pacific in 1945. Our children are our future…

Peace Poles for Over 100 schools across Australia Michael went to see the Warsaw Peace Bell. Standing next to their Bell was a Peace Pole with the words ‘May peace prevail on earth’ written in four languages.

Again inspired, he had another idea;

‘What if we could extend the message of peace by planting Peace Poles in schools throughout Australia?’

‘Let us give them Peace as our centenary gift from Rotary.’

The Peace Pole program had its beginnings in 1955. You can now find Peace Poles in close to 200 countries and over 200,000 have been installed around the World.


All Peace Poles are inscribed with the message ‘May Peace Prevail on Earth’. They symbolise our common wish for a World at Peace and represent a silent vigil reminding us to think and act in the spirit of Peace.


Rotary Clubs and school’s from around Australia are encouraged to become involved in this project. Will your Club or School be one of the 100 Rotary Clubs or Schools to support this initiative?


The plan is that the schools will recognise World Peace Day in a ceremony held at their Peace Pole. The donating Rotary Club will also send a member to attend and read the message of peace from the Secretary-General of the United Nations.

‘Imagine 100 ceremonies in 100 schools. That might be twenty or thirty thousand children getting that message of peace.’


Rotary also invites schools to visit the Canberra Rotary Peace Bell, where students will ring the Peace Bell and read the passage by Laozi in a memorable ceremony.


When Mr Rabey takes schoolboys to the Bell, he always makes a point of showing them the Chief Minister’s Peace Prize plaque and draws their attention to the 2019 prize recipient, Robyn Martin who manages Beryl Women, Australia’s longest-running women’s refuge. He explains to them she wouldn’t have that job if we weren’t suffering so much from domestic violence.


The Rotary Club hopes to encourage men to stand up against violence towards women and children. This is one of many issues that Rotary is trying to address.

‘And if we can also affect some older minds—that’s a bonus,’ he concludes.

Sponsor a Peace Pole at your local School

Start a conversation with your school or local Rotary Club.

Help spread a message of Peace

Live with peace in your heart and share the love with all you meet. Chris joined the Rotary Club of Hall in 2010. He has held a variety of Board positions with the club.

He is a family man who enjoys traveling and ‘the great outdoors'. He regularly starts his day with a walk or a jog. (He is also the youngest of the Sydney City2Surf Legends.)

Chris has been an Ambassador for Australian Rotary Health since 2016 and is the Event Director of the Rotary Aussie Peace Walk. 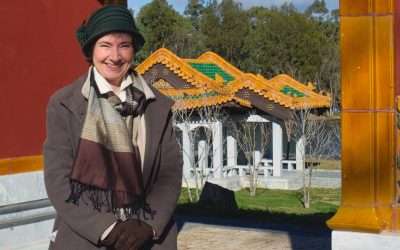 75 Years After WW2 The Battle Continues

If there is to be peace in the world, there must be peace between nations."We need to reach out to people in other parts of the world and build positive relationships."Whilst the cessation of war in the Pacific in 1945 brought many to tears of joy, its end came at a...