From Nara Peace Park on the shores of Lake Burley Griffin, we followed the route planned for the Sunday 21km peace walk. Early on a mild Spring morning, three of us gathered near the Canberra Nara Peace Park on the southern shores of Lake Burley Griffin. We planned to walk one of the 21-kilometre sections of the inaugural Aussie Peace Walk which will take place on the weekend of 26th to 28th March 2021.

From our start point, we headed south looking for the site of the Surveyors Camp which was established in 1909 by Charles Scrivener after whom the dam that forms Lake Burley Griffin is named. This is where the building of Canberra began.

A short stroll past the Brazilian Embassy and we headed into bushland at the site of Westlake. Westlake was a tradesmen’s camp and workers’ village established in 1922 to build Canberra and had a population of 700.

It was then a short amble down to the Molonglo River and the Bicentennial Trail which crosses the river via a convenient concrete weir. We followed the trail up and through the National Arboretum and into the Cork Oak Forest, which was planted in 1917 with seedlings from the Royal Botanical Garden in Melbourne.

“This walk leaves you in no doubt why they call Canberra ‘the bush capital’.” Site of the Tradesman’s Camp.

We soon passed the original Australian School of Forestry. The school opened in 1927 and its motto, ‘Mihi Cura Futuri’ ‘(‘I care for the future’) is proudly displayed above the entrance.

At the 7.5 kilometre mark, we arrived at the Governors’-General residence, Yarralumla.

Yarralumla was established in 1827 as one of the two main pastoral properties in the region. The other being Duntroon, which is now the Royal Military College. Both properties were owned by Robert Campbell at some stage. A very satisfying morning tea was followed by wandering back into the bush of the Black Mountain Nature Reserve, which is dominated by the 195m Telstra Tower and can be seen from most of the A.C.T.

With the establishment of Canberra, the forests of Black Mountain, containing dozens of species of orchids and eucalypts, were managed as the source of the fledgling capital’s firewood.

As we followed well-defined trails, listening to the calls of King Parrots, Galahs, Rosellas, Honeyeaters and the raucous shrieks of Sulphur-Crested Cockatoos, we mused that we were deep in bushland surrounded by a large city which is a national capital.

Although, Black Mountain has been important since European settlement it has had great significance to the Ngunnawal people for over 30,000 years.

The name “Canberra” comes from the Ngunnawal word Kambera which means, ‘Meeting place’. One version of the origins of the word is that the Kambera in question is the meeting place of two breasts, Black Mountain being one and Mount Ainslie the other. Wandering east along the northern shore, it was not long before we crossed back over to the southern shore via the Commonwealth Avenue Bridge, the fourth one to bear the name at this site.

The first two incarnations were damaged by floods and the third demolished so they could build the current bridge in anticipation of Lake Burley Griffin. We were treated to a light misting from the Captain Cook Memorial Jet as we crossed. The jet shoots water from the lake up to 150 metres into the air at an exit velocity of 250 kilometres per hour.

From the bridge, it was a meander to Albert Hall, the finishing point of the Aussie Peace Walk. With a few detours along the way, we covered 25 kilometres, which had taken us just over six very tranquil and relaxing hours.

Canberra has well and truly earned its title, ‘The Bush Capital’ and if the other sections of the Aussie Peace Walk are as beautiful as this one, it really will be a great weekend for all participants. Keep an eye out for Peter when you come to Canberra for the Rotary Aussie Peace Walk. He’ll be walking on the tracks with you. 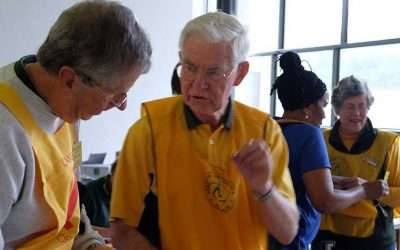 Join us for the 30th Canberra Two-Day Walk

END_OF_DOCUMENT_TOKEN_TO_BE_REPLACED 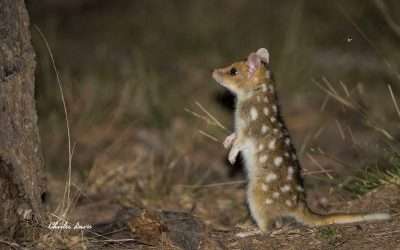 Spot Endangered Native Animals in an Ecosystem at the Forefront of ConservationIt is dusk, and a faint pink stripe lights the horizon across the carpark. On the playground you meet a ranger and a volunteer dressed in khakis and hi-vis. When the rest of the visitors...

END_OF_DOCUMENT_TOKEN_TO_BE_REPLACED Prevent Shin SplintsAvoid Knee InjuriesStop BlistersWalking is a pleasurable pastime to be enjoyed. Your body is designed for walking and it does it very well. However, if you injure yourself, walking will lose a lot of the shine.  Three common injuries can incur and,...